We water the trees we plant throughout the growing season (roughly April to September) for the first two years after planting. We do this because it takes that long for the newly planted trees to get their roots down deep and wide enough to ensure that they can find water for themselves.

It is important to make sure that water reaches to the bottom of the root ball – about 18 inches to 2 feet deep (0.5-0.6m to the metric generation) – and to facilitate this process we place a watering pipe round the root ball of each tree as we plant it. This is a flexible ‘leaky’ pipe one end of which protrudes above the ground. During the watering season each tree receives two full 2 gallon/10 litre cans of water taken (with permission) from the River Brain. One can goes down the pipe and the other over the surface to soak the top part of the root ball.

We normally go out once a week; a weekly soaking is more use to the tree than a daily dribble. If there has been heavy enough rain since the last watering, we leave the job to nature for a week. For the last three years we have faced dry summers, dry to the point of genuine drought. Consequently, we had virtually no ‘time off’.  This year was different in that from June there were regular showers and the average temperature was below the norm, which made it a particularly good growing season. However, the showers were intermittent and the ground dried in the intervals. The result was that for all the rain there was only one week when we were convinced that there had been enough rain to justify us in not watering.

Obviously, we err on the side of caution and for those whose picnics and barbecues have been ruined by rain it may seem strange that we carried on watering but it takes heavy and continuous rain to penetrate essentially dry ground to a depth of 18 inches/half a metre. Two of our members have rain gauges and, in the view of some of us, they take unjustified pleasure after each downpour in pointing out that the apparently torrential rain amounted to only half an inch or less.

As recorded in the April report above, we had a record number of trees to water this year. In the event we did not have to water the 500 whips but that still left us more than 130 trees requiring two cans each. Our first watering round took us more than three hours but, as we worked out the best route and the most effective deployment of our resources, we cut the time to close to two hours, plus a well deserved coffee break.

As also recorded in the earlier report, some of our team were unavailable for watering due to work commitments (though one was able to return to duty in mid-July). We also lost another member at the beginning of the season owing to a long term injury. Fortunately, by lamenting pitifully our misfortune in the presence of family and friends, we moved three of them, two full-time and one occasionally, to join the team and we are very grateful for their help. Given that we are all forced to miss the occasional watering day due to ill health, other demands or the return of summer holidays, we would have been severely stretched without these additional volunteers. 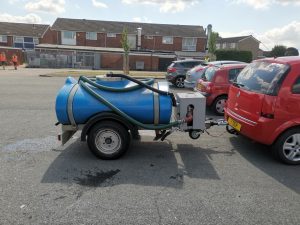 As it is, with only a few more weeks of the season to go, we have managed to water all of the trees planted in the last two planting seasons (and a few others that looked in need) and kept them all alive (a small number will need attention during the winter but none suffered from lack of water). If you want to know the value of regular watering, have a look at the trees planted, without an effective watering plan, in the new housing estates and other building developments around Witham. We surveyed the trees at three major sites this spring and found that around 20% failed in the first year. Our own failure rate is around 1%.

Shortly our attention will switch from watering to planting. The existing trees have begun to slow down their growth and in a few weeks will begin to lose their leaves. About half of those watered this summer will be ready to find water for themselves next summer but in their place we will take on the watering of the trees we plant this autumn and winter. We are in the middle of discussions with our funding bodies and other interested parties about where and what to plant during the autumn and winter but it looks likely that we will be watering at least the same number of trees in the 2022 watering season. Do keep reading our website for details as the plans are finalised and agreed.

Meanwhile, if you are interested in helping to plant trees (and perhaps water them too), do contact us through this website. If you can only be available at weekends, that is not a problem; we can adapt the timing of the planting to the people available, as we have done in the past. Planting trees and making sure they get established is an investment in the future. We can assure you that you will find it a rewarding use of your time.