Braintree District Council (BDC), in consultation with Witham Tree Group and with the support of Witham Town Council, originally planned to plant trees between Bramble Road and Honeysuckle Way to provide a park in memory of those men of Witham who fought, and in particular those who gave their lives, in the First World War. We have reported here on the progress and completion of the original scheme over the last two planting seasons. This year BDC has decided to extend the Park to commemorate additionally those men of Witham who gave their lives in the Second World War, as well as the more recent loss of Corporal L. Newell in Afghanistan. The Park has therefore become a War Memorial Park rather than commemorating a particular conflict.

This extension of the Memorial Park involved the planting of 35 more trees, 18 on 21 October and the remaining 17 on 28 October. On both occasions the Group had the assistance of volunteers from Aegon Insurance, as well as our customary support from Will and Ollie from BDC’s contractors Bee Brook. The two planting days were a contrast, the first damp and very windy and the second dry and sunny, though the wind did get up towards the end. We normally start planting in November or December and one effect of the early start this year was that the trees to be planted still had their leaves on, albeit turning to their Autumn colours. The leaves of course gave the wind more purchase on the trees with the result that planting, supporting and caging the trees was rather more of a struggle than usual. Nevertheless, all the trees were in the ground on each day before we dragged weary limbs and out-of-practice muscles off the site. 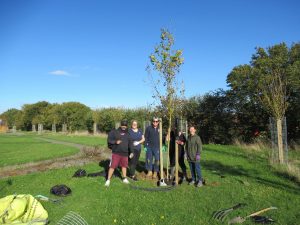 We were pleased to welcome our new member, Clare, to her first planting day. As we were aiming to equal our record of the most trees planted in one day, this was dropping Clare in at the deep end but she had no trouble keeping her head above water and we look forward to her help on other planting days this season.

We have had the assistance of volunteers from Aegon (or its predecessor, Cofunds) on a number of projects over recent years. Every one of the several dozen staff members who have helped us in that time has delivered infectious enthusiasm and untiring effort. We could not have completed all our projects, particularly the War Memorial Park, without their help. Added to the roll of honour on this occasion were Alex, Bobby, Claire, Katie, Roger, Suraya and Terry the first week and Bobby, Jane, Karen, Leanne and Lloyd the second week. You will see that Bobby helped on both occasions; he is pipped only by Lloyd who was returning for his third contribution after helping us on two occasions in previous years. We always enjoy the company of our Aegon friends and admire their commitment. 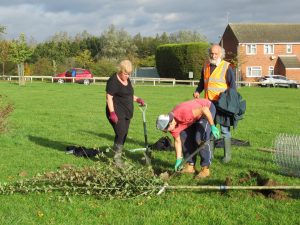 As ever Will and Ollie of Bee Brook were excellent workers and excellent company. We benefit hugely from their willingness to turn their hand to whatever task is needed, particularly their help with some of the heavier work. As you walk round the Park, note the more than 200 supporting posts and reflect that probably more than half were rammed home by one man, Ollie from Bee Brook.

Finally, just as the director is usually the last name in film credits, we should give a most honourable mention to Shaun Taylor, the BDC officer who did so much to secure support for this project. Having obtained approval to proceed, it was Shaun who decided which trees to purchase and where they should go. We always enjoy working with Shaun and he is always happy to listen to our own ideas on planting. While there are no more plans for this site, we are working with Shaun on other projects, some of which we shall be reporting on later in the season. 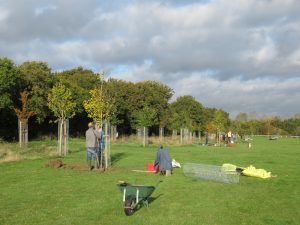 While we have completed work on the Memorial Park for the present planting season, a project like this is never quite finished It may be necessary to replace some trees from time to time and, as the Park matures, it may become clear that some amendment to the shape or content of the Park would improve its impact. But the Park is now fully established as a permanent feature of the landscape, a constant reminder to the present residents of Witham that their predecessors included those who were prepared to risk their lives in defence of this country. The next step will be for BDC to commission and install signs to explain the purpose of the Park.

We have enjoyed participating in this important project, contributing to a long term feature of the town’s life and an amenity for future generations. It has been a major undertaking but we still have many other only slightly less ambitious planting plans to carry out. If you are interested in lending a hand, regularly or only from time to time, do get in touch with us through this site.